So we Tried to drive by the Alamo in San Antonio, Texas.. We knew that pets were not allowed on the Alamo Grounds, we just wanted a peak of the outside and maybe a picture. Big mistake they were having an Earth-day festival. The place was swamped. We could not even get close. So we counted our losses and Headed to Buda City Park.

When we arrived, we did not know where we were setting up, so we asked around.

While we were waiting, we talked to some of the people there and showed them some of our tricks.

One of my tricks that I did, that we call the "through back through", is where I jump through Dads Legs. At the end of the trick, I started limping. Mom said, "let me see your paw", and I did. At first she could not see anything wrong. So she handed me to dad, to get a better look.

Well I had landed on a thorn. It lodged between the pads in my paw. It was in deep and about an inch long. Mom just grabbed it and pulled. It came out quickly but it hurt! I was very brave.

We met Justin and he showed us were we could set up and Park for tomorrow. He gave us VIP Passes. So cool!

Off to the hotel.

We stayed at Red Roof Inn in Austin, Texas

We would not recommend this location.

Hotel Hi-jinx…. We get a knock at our door, about 11:00 PM, saying they were having computer trouble and wanted our name to confirm we checked in. What???

Dad said his name, then got worried it may not have been the hotel…

They now have our names and room number. What would they use that for…..

In the morning he confirmed it was actually the hotel that went to our room last night. Ugh!!!

We got there early to set up.... We were stationed right outside the racing tent. We were excited, this is a Great place to meet and talk to people! 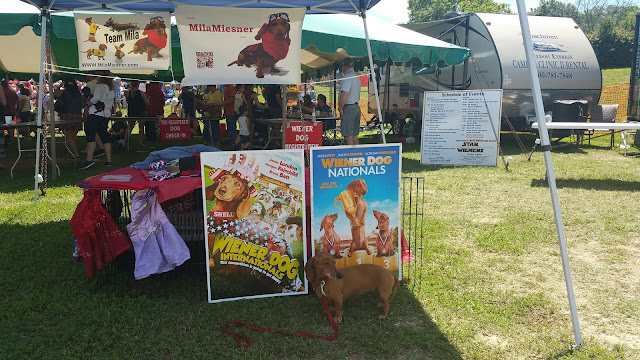 The Categories were.
Most Colorful - Best Pet & Owner (matching) Costumes - Most Unusual - Best Theme (best representation of the Wiener Dog theme of the current year)

Here are some photos by Hays-Free-Press of us.

You can see more entries and photos here...
Hays-Free-Press The-2016-Buda-Wiener-Dog

(best representation of the Wiener Dog theme of the current year) 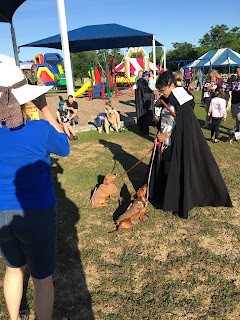 We even did a sword fight with Jedi. 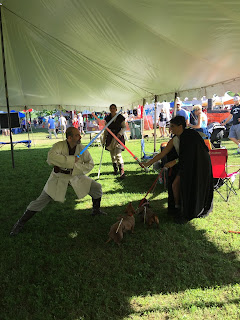 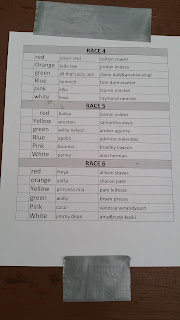 So let me tell you about how Buda runs their races. They were different than the races we were use to.

First rule - no food! Please use a toy instead. 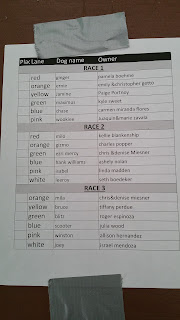 Everyone’s name and race is sent to them by Email. It is also printed on sheets of paper in the tent, so you know what race you will be in, and your color. Only one handler is used per dog.

They call your race and you go to a table. The Vets that are there, check you to make sure you can run.

You are given a colored collar, as you see in the picture, Ezri was green. Then you are sent into a holding area either to the left or the right. Which is right Outside the main race area. So that they have two groups of racers prepped and ready to race. 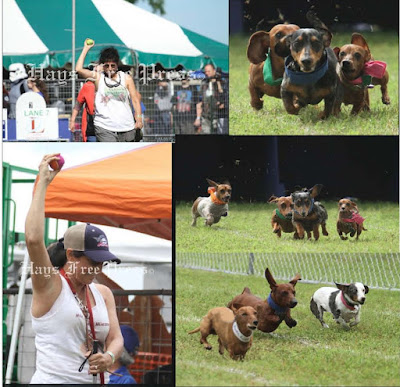 Then when it is your turn to race, you go through a gate and go to your color.


The racing boxes are large boxes with top sides and a back. On the back is a port hole, you are put in through the port hole that is then closed. 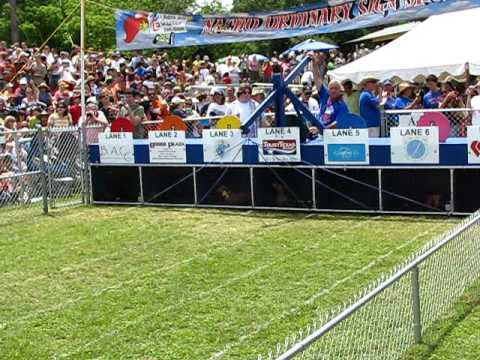 Then your mom walks around to the left and gets in front of the Box which is covered in mesh. The mesh is on PVC pipe and is lifted from the front by a large Lever, that is located in the back of the boxes, where you were put in.

The Judges walk everyone back with a flag at the same time. The judges who are the local police stand behind a fence at the finish line.

Mom is sent back another 10 yards behind another line. The stands and hill are packed with fans.

The first and Second dog across the finish line move on to the race that is on Sunday at 3.

On Sunday the wieners of the preliminary races above are again posted on paper in the race tent. The races are run in groups of 6 until you have a winner.

Here are a few Videos so you can see what I mean.
Pay special attention to the announcer he is funny!

I was in the 5th race and I came in first.


That meant we could enjoy the rest of the things at the Fair because we were secured a place in the 3:00 pm Races on Sunday.

First we decided to cool our feet in the pool. 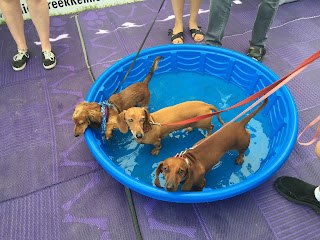 Then we took photos with Oscar Myers hot dogs. 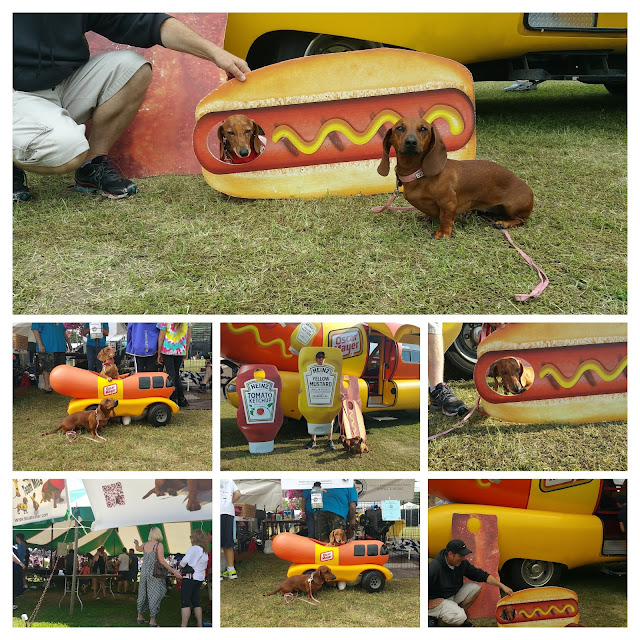 After exploring the venders and getting barbecue at the food tent we decided to return to our tent. 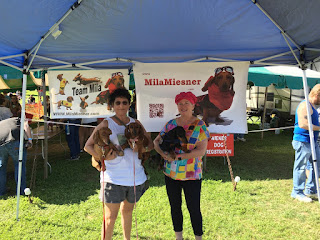 We meet Maria Pronski. - A big racing fan. Her dog was in "Lord of the wiens" that is the documentary Movie they made here about the races in Buda Texas.

After all the meeting and greeting, along with checking out the food and vendors, we decided at around 4 o'Clock to head back to the Hotel.

Mom and Dad gave us food and headed out to Saturday evening Mass, with a plan for a nice dinner after.

On their way to dinner they got a phone call from the Hotel that we were making too much noise and could they make us quite. ... Mom and Dad were perplexed by this, because we usually just watch TV and sleep. They  know this because they have videos of us being couch potatoes.

When they got to the hotel room we were as quite as mice, just sitting in our beds watching TV.

It was great for us, that they came back, because we got to go to dinner with them in a nice little restaurant in Austin.

Flash forward to around 11 pm that night. We are all asleep in bed, when we hear children running up the hall to our door. They begin to yell ding, dong, ding, dong, at our door. Well, this sets Ezri off on a barking fit. Dad gets her to calm down, and a few seconds later they do it again. When it happened a third time, Dad got mad! He stormed out the hotel room and in his best fatherly voice, yelled at the kids to get there butts back in their room. Their mom just said, "Oh, It's OK, lets just do something else".  Well! Dad was fit to be tied. How could a parent be so irresponsible? The kids must have been doing this before, and that is why the hotel called us earlier.

Well, we finally all got back to sleep. We had to wake up early to get our tent set up and prepared for the finals. 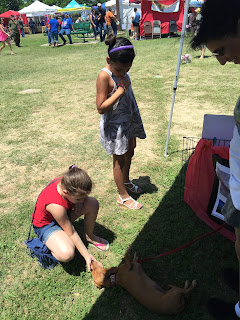 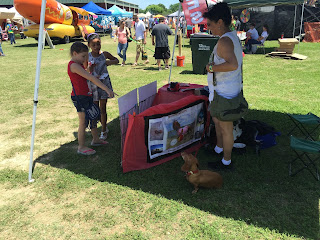 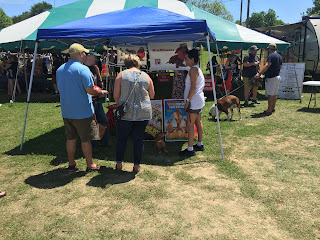 We even did a trick demonstration and had quite a crowd watching! 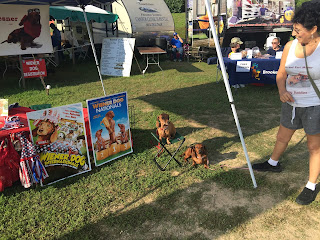 Then we got sent into are crate to take a power nap before the big event.

According to race organizers 20,000 people showed up to cheer on the little dogs at the Lion's Club's popular annual event.
It's the club's biggest fundraising event with more than 120 Dachshunds competing.
Wiener dogs came from near and far, bringing along their enthusiastic owners. 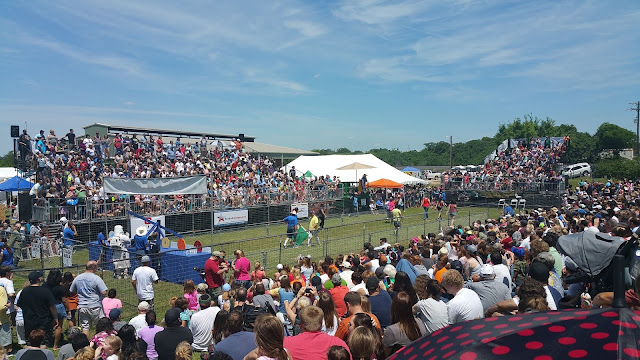 Here is a picture of the winners Trophy.
The others were just smaller versions of this one with -
this is Justin He and Nancy organize the races. 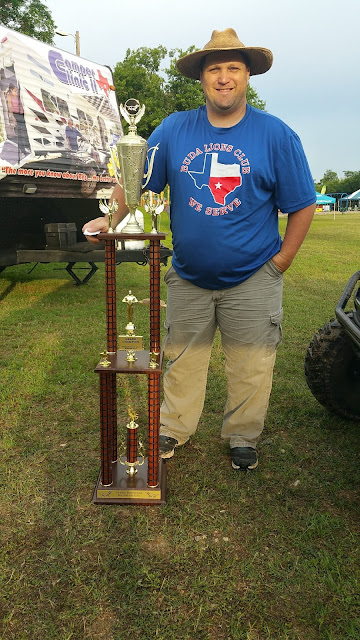 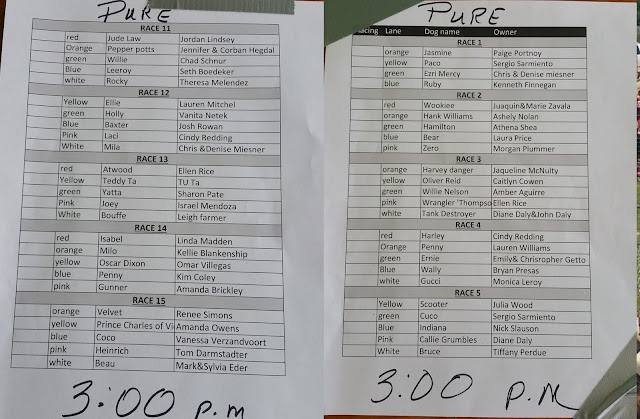 Between Races at the qualifiers for that day, it decided to Rain hard. Every one left the stands, and headed to our tent and the racers tent trying to stay dry. The rain left as suddenly as it had come and the races were resumed.

Ezri made it to the quarterfinals race. She was in the lead out of the boxes. But she got squeezed out between two dogs and did not get first or second in her race.
My race was uneventful and I was able to make it to the semi-finals.

In the Semifinals, there was a trash talking piebald dachshund next to me in the boxes. Mom could not get me to focus on her. So out of the box I barked at the other dog and so I lost my spot and was eliminated from the finals. 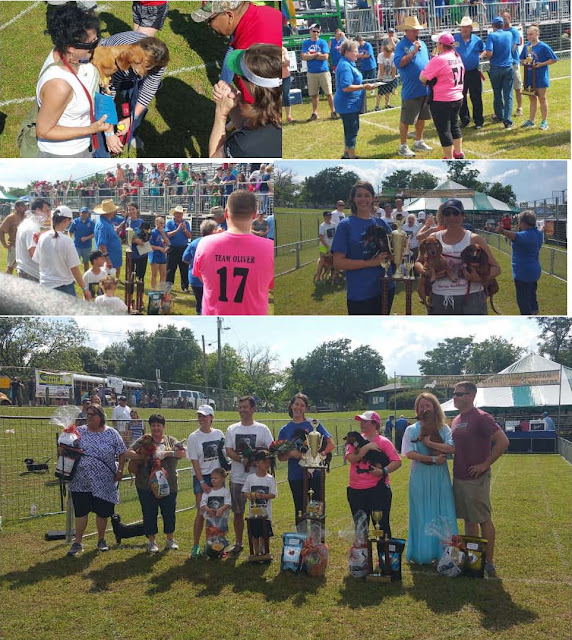 Here are the trophy Winners.


Link for next years Event

After the races ended we headed to an outdoor dinner in Buda Texas at a place called Willie's Joint BAR and BBQ. 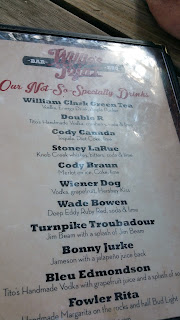 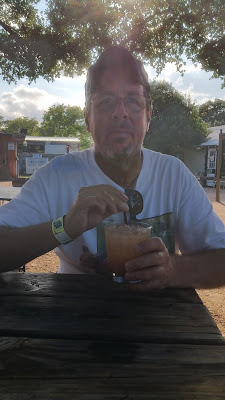 They had a drink called the Wiener Dog. So dad had to try it. It had Vodka cranberry and a chocolate kiss. I guess sweet with a bite. 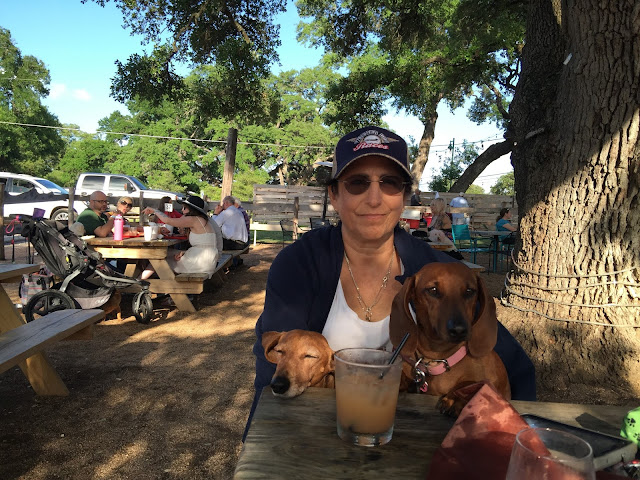 But before we left I talk her into the Teeter Totter and Jenga. 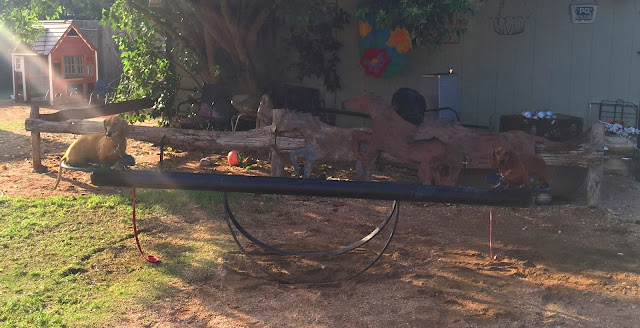 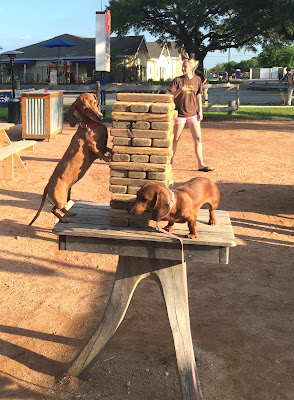 There were several Wiener Dog Themed restaurants. - this one is called Nates

We will try that next time?