Eight kids develop their natural talents to superhero levels to confront a comic-book-inspired villain kidnapping neighborhood dogs to pull off the crime of the century.

RYAN is a 12 year-old girl and a comic book enthusiast who likes nothing more than playing superhero.  His friends, beautiful ALAINA, fast-paced DAVID, clever IAN, tiny COLE, shrill AMBER, subtle LAUREN and cunning SAMANTHA think that they’re too old for these kinds of games.  This all changes when all the dogs in the neighborhood begin to disappear mysteriously.

The police is baffled. When Lauren’s dog got kidnappened, Ryan convinces his friends that their best chance to find all the missing dogs is to improve their talents and use them to finding the dogs.  Through clever training Alaina becomes more beautiful, David becomes faster, Ian turns smarter, Cole learns to use his size to his advantage, Amber strengthens her voice, Lauren learns to go completely undetected and Samantha becomes capable to trick the most clever minds.

Yet their first mission is a bust and they all turn against Ryan’s leadership.  While alone, Ryan learns in an old comic book about the true plans of DRAGMAR, the villain behind the disappearance of the dogs.
Ryan goes to the police, but they don’t believe in his explanations and, upon exiting the station, Dragmar kidnaps Ryan.

Ryan manages to trick Dragmar into revealing the rest of his plans of using kidnapped dogs to transport the bombs to rob banks in his quest for global domination.  This gains Ryan some time to contact his friends.  Using their newly developed powers in combination and under the bright leadership of Ryan, the eight kids defeat the villain and save the dogs and the city. 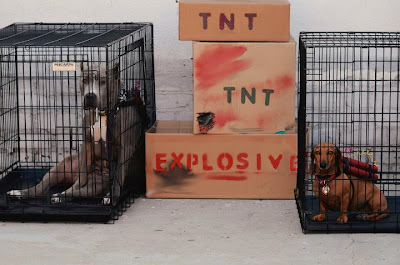 At the end, they become the R.A.D.I.C.A.L.S. – the acronym of the  superhero team names – made entirely of normal boys and girls who were brave enough to fight for what they believed was right and won by exercising their abilities to a super hero level.

Posted by Denise Miesner - dog trainer Mila, Ezri & Jeep at 8:53 AM No comments: