Wiener Nationals 2010 - for your viewing pleasure

Photo can be found at Wiener National 2010
Posted by Denise Miesner - dog trainer Mila, Ezri & Jeep at 5:12 PM No comments: 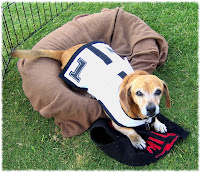 Back from the San Diego Wienerschnitzel Wiener Nationals.

We had a lot of fun. My brother got to race with me and he came in second out of 4 doxies in our heat. He is a 14 year old dog who has raced before, but this was the first time he crossed the finish line.

It was nice seeing all my friends. Thanks for coming by and saying hi.  It was fun to see many of them make it to the top 16. I ended up with  time of 2.88 seconds. You will all have to come out to the Del Mar Race Track on  Sept. 6 and cheer us all on. 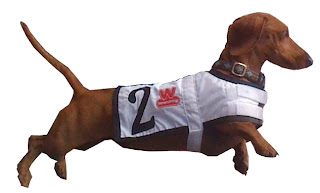 If any one got pictures or videos of the races or dogs let me know where you post them I would love to see them.

On Labor Day September 6, the fastest 16 dachshunds (from August 28 preliminary rounds), will compete in the San Diego Finals of the Wienerschnitzel Wiener Nationals – A Bridgepoint Education Holiday Bowl Production.

The Del Mar winner advances to the National final which determines the fastest wiener in the nation.
Don't miss these adorable, free-spirited, low-to-the-ground athletes on their quest for stardom!

Labor Day brings one of the season’s most festive crowds to celebrate the last weekend of the racing season when the Del Mar Racetrack hosts the Wiener Dog Nationals San Diego Finals for the first time. This year, racing fans will not only catch Thoroughbreds on the track, but Wiener dogs, too.

The Wiener Dog Nationals San Diego Finals will determine the fastest Wiener dog in San Diego. The top 16 dachshunds will compete to advance to the Wiener Nationals final which determines the fastest wiener in the nation. Don’t miss these adorable, free-spirited, low-to-the-ground runners.

Hot dog! It's wiener dog race time and if you have one of those cute little Dachshunds that's quick on its feet well give him a chance to show off his skills at the dog race this Saturday!
Wienerschnitzel Wiener Nationals - San Diego Qualifier, produced by the Bridgepoint Education Holiday Bowl happening this Saturday, August 28 from 8am - 11am at Qualcomm Stadium Rugby Fields. It is free to spectators but there is a $10 entry fee for dogs.