If you're a dog lover (hey, who in this group isn't!) and you've ever seen on TV the spectacle that is the famous Westminster Kennel Club Dog Show, you know how entertaining dog shows can be. Just seeing all the breeds of dogs and their unique personalities is a lot of fun. Of course, at the same time, while you're watching these immaculately groomed and well-behaved pooches on TV, you look down at your feet and see your own loved mutt and mumble, "How come you don't act and look like that?" Ah, we can always wish... What's even better than watching a dog show on TV is to see one in person. Especially a large show, which includes all the AKC breeds. San Diego's annual dog spectacle, the Silver Bay Kennel Club Dog Show, sets up at the Del Mar Fairgrounds on Saturday and Sunday, Feb. 26-28, 2009. And what better way to spend the weekend than to check out all the amazing breeds: small, large, huge, cute, ugly, prim, sloppy...but they're all lovable. And the best thing is that admission is free. Hours: Friday, 8:00AM-6:00PM 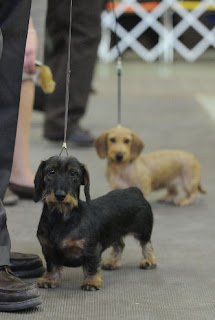 Saturday, 8:00AM-7:00PM Sunday, 8:00AM-3:00PM Price: Free admission Location: O'Brien, Bing Crosby and Exhibit Halls Parking: $9.00 The Silver Bay Kennel Club dog show is one of the largest in the United States. It will take place in the O'Brien, Bing Crosby and Exhibit Halls. A dog agility competition also will be part of the competition. Members of the public who would like to see that can take a tram to the competition location. Please see the Web site listed at the bottom of this page for judging schedule and other information. For more information, please contact: http://www.jbradshaw.... Silver Bay Kennel Club 760-751-2302 premium List DOG SHOW TOUR YOU'RE INVITED TO ATTEND! Please join us on a 10:00 AM dog show tour on Saturday and Sunday. See the breeds, meet breeders, owners and handlers. Tour meets 5 minutes prior to our departure at the Superintendent's table in Bing Crosby Hall. Obedience Club of San Diego County Inc.
Obedience & Rally Trials  - Friday, February 26, 2010- Specialties & Trials


The Silver Bay Kennel Club dog show is one of the largest in the United States. It will take place in the O'Brien, Bing Crosby and Exhibit Halls. A dog agility competition also will be part of the competition. Members of the public who would like to see that can take a tram to the competition location.

Please see the Web site listed at the bottom of this page for judging schedule and other information.
For more information, please contact:
http://www.jbradshaw.com/64/index.htm
Silver Bay Kennel Club
760-751-2302


The dachshund club of San Diego will be participation in the Dog Show. They will also be having a meet the breed booth. Please come by and say Hi! Mila and I will be there on Saturday from 10:00 till noon.

Helping Pets of the Homeless

I came across this article and wanted to pass it along to my dog friends. One woman has launched a very personal campaign - to clothe dogs living with San Diego's homeless.

Kelly Tomke thought of the idea one November day when she was driving through downtown, headed home to Golden Hill, and she spotted a dog's water dish.

Tomke had knit sweaters for the three dogs in her life, including her 14-year old poodle Bonaparte The Little General. She briefly considered knitting something for the dogs living with the homeless but soon realized that would be impossible.

However, older sweaters that Bonaparte wasn't wearing could be reused. With that idea, she started Keep Woofy Warm through a Craigslist posting and a couple of flyers posted around town.

Tomke's campaign to take used pet items and regift them for the pets of the homeless started slowly. After her story appeared in a local newspaper column, donations started coming in.

"It's all been good. It hasn't been great, but I didn't know what to expect," she said. "I'm happy something is happening. I'm okay with that."

She feels dogs help homeless people beyond simply protecting their stuff. "They need something to live for and I guess a pet is it," she said.

Soon, she found herself collecting more than just sweaters.

"It's food, it's toys, it's chew toys," she said. The items aren't necessarily new but may be items left by a pet that has passed on or one that has outgrown the sweater or toy.

"The stuff is useful," she said. "That's the point that I'm trying to bring across."

Tomke estimates she's received 30 sweaters so far and handles the distribution on her own.

People interested in donating send Tomke an email and she arranges for pickup. Residents in the North County can drop off donations at Synergy Escondido on 710 East Grand. James Young, Tomke's friend for more than 20 years, offered the site after several donations came in from North of Interstate 8.

"I think it’s a great idea," said Young. "She’s helping the homeless people and their dogs."

But Tomke doesn't think she's doing anything that can't be done by anyone else in San Diego.

"You don't need me," she said, "If you have a homeless group near you, find out how you can help."

Some may argue dogs have coats and don't need sweaters or blankets but Tomke disagrees.

A new short video I created - This is a spoof of the Movie "Robin Hood: Men in Tights" (1993)Directed by Mel Brooks. But this is Dogs in Tight Tights. If you want a laughs take a look.

During the Big Balloon Parade there were many dachshund events going on. There was the 14th annual Wienerschnitzel Wiener Nationals dog race before the start of the 2009 Port of San Diego Big Bay Balloon Parade.

The day started with a breakfast for the entrants. Then on to the Race itself. The Race started with a run off between Princes Destiny, and another dachshund. Followed by a few practice runs to warm the dogs up, and an introductions of the dogs to be raced. Then on to the main event, the race for the fastest dog. Sully from San Clement walk away with that title.

The race contestants were then allowed to sit on a float hosted by the Wienerschnitzel Wiener Nationals. 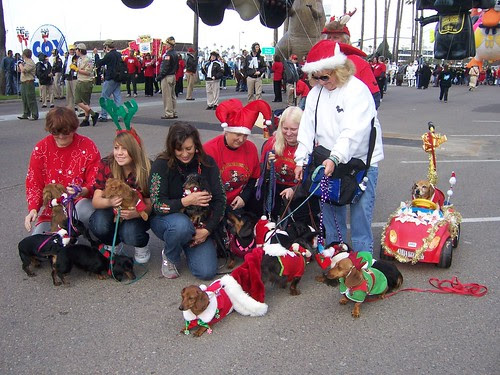 The Dachshund Club of San Diego also had an entry in the parade. The members marched there dachshunds in costumes to the delight of the Crowds. 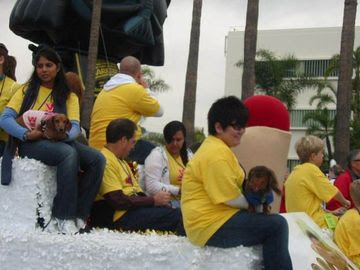 
If any one has any more photos posted on the internet please contact me with the link so I can reference it for others to see.

San Clemente dog named fastest wiener in the West | Dogs, cats ...
By News Hound
Sully outsprinted seven other wiener dogs to win in the Wienerschnitzel Wiener Nationals race today at the Port of San Diego Big Bay Balloon Parade. As the premier dogs were nearing the finish line, the wiener behind Sully bit him in ...
Dogs, cats, pets news and information - http://pettails.mydogspace.com/