It's Halloween, Willis the Wiener Dog

Posted by Denise Miesner - dog trainer Mila, Ezri & Jeep at 8:52 AM No comments: 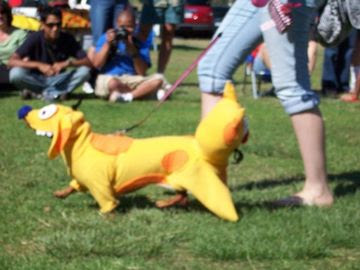 Dachshund meet-up of San Diego has publish some more photos of the great Halloween-er pick nick of 09. This is also a great group if you are looking for something to do with your Doxie. Check it out. The San Diego Dachshund Meetup Group

Posted by Denise Miesner - dog trainer Mila, Ezri & Jeep at 8:39 AM No comments:

Over 300 Dachshunds had a great time at the 2009 San Diego HALLOWIENER Dachshund Picnic on Sunday in Balboa Park, San Diego, California. Work it, Wiener Dogs! Fun video by youtuber pishydish.

You can see more photos @ Halloweiner 09
Posted by Denise Miesner - dog trainer Mila, Ezri & Jeep at 8:31 AM No comments:

A Dog Saves Another Dog Hit By A Car

This may be the most amazing animal video we have ever seen. The video is from a traffic camera overlooking the busy Costanera Norte freeway in Santiago, Chile. It shows a dog that has been hit by a car on a busy highway. Under these conditions, such an animal would not have a chance of being saved. Enter our compassionate hero...

This video has been viewed by millions around the world with the same gut-wrenching, yet heartwarming reaction. At the time of my narration, it was reported that the injured dog had lived. Unfortunately, we now know otherwise.

What is most important to note is the fact that it took a little stray dog with a big heart to touch the world and in doing so, perhaps put us in touch with ourselves. Judging from the countless comments of concern, it is obvious that, for the most part, we are one in our respect for life.

So, wherever you live and whatever you may take in from the media this week, may you long remember the message this loving homeless canine brought us on the eve of the holiest of seasons.

Chileans have a new hero: an apparently homeless dog that pulled the body of another dog through traffic off a busy highway. A surveillance camera on a Santiago freeway captured images of a dog trotting past speeding cars to pull the lifeless body of the other canine, which had been run over by a vehicle, away from traffic and onto the median strip.

The scene was broadcast by Chilean television stations and then posted on Web sites, and hundreds of thousands of people had viewed versions of it by Monday.

Highway crews removed both the dead and live dogs from the median strip of the Vespucio Norte Highway shortly after the Dec. 4 incident. But the rescuer dog ran away.

Authorities say images of the rescue prompted some people to call and offer to adopt the dog, but neither highway workers nor a television crew could find they animal.

It is estimated that there are 220,000 stray dogs in the Santiago area alone.

Like many/most countries, Chile isn’t an easy place to be a dog. Earlier this month, Chilean authorities raided the Benjamin Vinuña Mackenna Animal Protection Society where disease is rampant and animals are being killed in huge numbers instead of sheltered and adopted out. This organization was established in 1915 and reportedly is representative of the conditions in most shelters in Chile.
Posted by Denise Miesner - dog trainer Mila, Ezri & Jeep at 12:46 PM No comments: