Taken by Port of San Diego 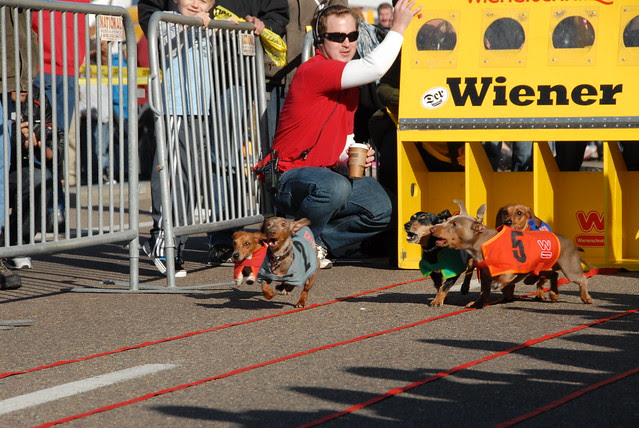 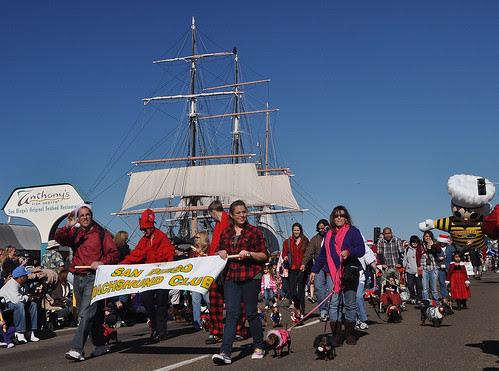 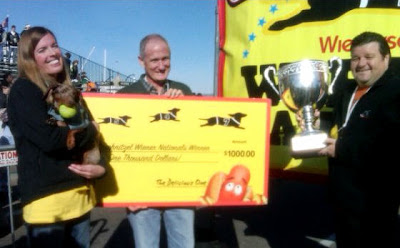 Congratulations to Albuquerque, New Mexico native red smooth 'Calvin,' who has officially earned the title of The Fastest Wiener in the West by winning the 15th Annual Wienerschnitzel Wiener Nationals Thursday at the Port of San Diego Big Bay Balloon Parade. Way to go Calvin! The Wiener Nationals are the United States national Dachshund racing championships sponsored by the Wienerschnitzel food chain. Regional qualifiers are held in the Southwestern United States (California, Texas, Arizona, Nevada, New Mexico), with the final 8 Dachshunds racing for the national title every December in San Diego as part of the Holiday Bowl.


Excerpt from The OC Register:

This has been a big year for Sully [the 2009 Champion], San Clemente's most celebrated wiener. But the dog came up a little short Thursday at Wienerschnitzel's 2010 Wiener Nationals in San Diego.
Sully's San Clemente owners report that Calvin, a deft dachshund from New Mexico, was the winner of an eight-dog finale that produced a bit of chaos among the runners-up.
After originally thinking Sully may have placed third, San Clemente's Miranda Libres, who owns Sully with her boyfriend Juan Flores, learned that Sully finished second. A video replay confirmed it, Libres' mother reported via e-mail.
As the 56-foot race began, Libres stood at the finish line trying to coax Sully to come to her, but someone bumped her out of the way and she thinks Sully lost sight of her, unable to focus on the finish line. Calvin, meanwhile, stayed focused on his favorite tennis ball and took the win.

Read more about the finals at The OC Register.  See great stories of the regional qualifiers in the archives.